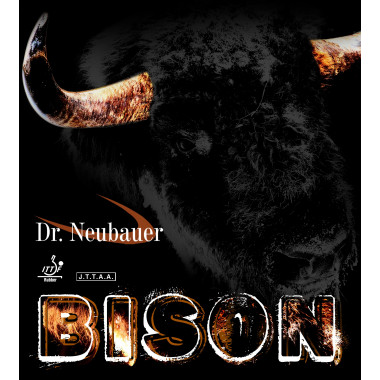 The latest generation of Anti-Spin rubbers sets a new benchmark

In that regard the rubber is just as effective as the old frictionless long pimples since excellent spin reversal can be achieved especially while blocking against topspin shots with a lot of rotation.

Its very low speed also brings back memories from the good old times: BISON sets a new standard in the field of completely frictionless Anti-Spin rubbers on account of its ability to return the ball very short over the net.

BISON can be used both on classic "combination" blades as well as on fast and stiff offensive blades thanks to the absorption power of its dampening sponge that will literally "kill" the speed of the oncoming ball. Even so-called "power loops" (high speed, little spin) can be returned without difficulty.
All in all BISON is easy to handle and provides both great control and maximum spin reversal even on fast blades.

Dr.Neubauer BISON: The new benchmark for blocking close to the table

Available with dampening sponge with the following thickness: 1.2, 1.5 and 1.8mm
The version with 1.8mm is the slowest, while 1.2mm will produce the best spin reversal.The 1.5mm sponge version is a very good compromise.